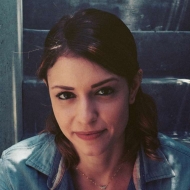 Stephanie Economou
Los Angeles•http://www.stephanieeconomou.com
Stephanie Economou is a composer and multi-instrumentalist, whose most notable work has been born from her collaborative work with Golden Globe-nominated composer, Harry Gregson-Williams. It is her uniquely hybridized compositional voice which has proven a valuable asset across a wide spectrum of visual media, making her a highly sought after and diverse emerging composer.
This user account status is Approved

This user has not added any information to their profile yet.

Stephanie Economou is a composer and violinist based in Los Angeles, CA. Her early successes have emerged from her exploration and study of widely varying musical styles, including classical, folk, rock, electronic and jazz. Her most rewarding undertakings have been her partnerships with independent filmmakers, which have granted her the rare opportunity to harness a myriad of genres simultaneously. Stephanie’s experience in film scoring extends from drama to comedy to animation, which has demanded the synthesis of an electronic and acoustic musical palette. It is her uniquely hybridized compositional voice which has proven a valuable asset across a wide spectrum of visual media, making her a highly sought after and diverse emerging composer.
Stephanie's most notable work has been born from her composing apprenticeship with Golden Globe-nominated composer, Harry Gregson-Williams, with whom she has worked with since early 2014. Stephanie holds credits as additional composer, orchestrator, and music arranger on Ridley Scott's Oscar-winning film “The Martian”, Ben Affleck's "Live By Night", Niki Caro’s “The Zookeeper’s Wife”, Catherine Hardwicke's “Miss You Already”, and Rick Famuyiwa’s HBO drama “Confirmation”. Most recently, she has composed additional music for the Australian drama "Breath" directed by Simon Baker. Stephanie has garnered professional experience as conductor and score reader at highly prestigious studios including Abbey Road Studios, Synchron Stage Vienna, Skywalker Sound, and Sony Pictures.

In 2015, Stephanie was chosen as one of six fellows for the Sundance Institute Composers Lab at Skywalker Ranch. It was through this experience with the Sundance Institute that she felt her diversity as a woman in the film industry to be deeply fostered and celebrated. Stephanie considers the empowerment of women in film an exceedingly necessary platform, and strives to make her voice, as well as other female voices in the industry, heard.

Originally from Long Island, New York, Stephanie received her Bachelor’s degree in Composition from the New England Conservatory of Music and Master’s in Composition for Visual Media from University of California Los Angeles. Her works, both for the concert stage and film, have been performed and screened extensively in New York, Massachusetts, and California, with the most memorable venues including Jordan Hall, James Bridges Theater, and the Boston Museum of Fine Arts.

Please consider a donation, which can be made separately, or in addition to your membership.